Facebook has introduced their newest edition to the site, the Graph Search. Facebook’s so-called social graph maps out the connections between each user. Graph Search is Facebook’s determined attempt to turn your social network into a custom-made search engine.  People are calling it the most powerful “stalking” tool ever invented. Facebook considers Graph Search its “third pillar,” after News Feed and Timeline. It has been in testing for the past six months and was presented to U.S. English-language users this past Monday. 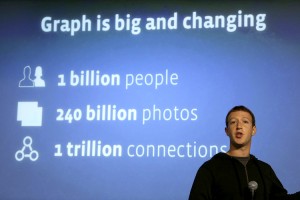 The way that most Facebook users find information is through the News Feed, which displays a combination of the most recent posts from friends into a single stream.  A user can also look directly at someone’s Timeline for a more detailed synopsis of their Facebook life.  A Graph Search might be something like “2008 photos of my college friends ” or “people who like the show ‘FRIENDS’.”  You can even get as detailed as, “friends of my friends who are single, twenty-six years old, live in Philadelphia.” After each search, there is a page full of profile pictures —majority of them are probably people you’ve never seen before.  This is because Graph Search searches through your “friends of friends” network, a grouping that is way larger than just your “friends” network.

Facebook isn’t making new information public—the company has been very careful to make sure that Graph Search respects all the privacy settings that users have put into place—but it completely changes the quality of that information’s availability. Graph Search will virtually catalog all of the content on Facebook, eventually – this means every link that’s ever been posted, every status update and every piece of data that outside websites have shared with Facebook, through its Open Graph program. Open Graph is the way that Facebook organizes the information and connections on its platform. It is an extension of Facebook’s social graph that anyone can build upon, whether by adding simple Like button to a website or developing full-scale additions like Spotify’s music service.  What users will get presently is fairly limited in it’s scope.  It will still be restricted to searches of photos, people, places, and interests.  Also, it doesn’t work on mobile yet but just like the hashtags, they are working on it.

The Importance of PR for Your Business...
Is Your Company Ready for a Brand Refresh?...
How to Advertise in a Post-Pandemic Environment...
Back To Blog Page
Close