Tuesday night, the Neff Associates PR team attended the 45th Annual Pepperpot & Achievement Awards, hosted by the Philadelphia Chapter of the Public Relations Society of America. This prominent event is held each year to honor the area’s top public relations efforts. This year, Neff Associates is pleased to announce that we took home THREE Pepperpot Awards!

Our awards included the Pepperpot for excellence in Media Relations for Joe’s Steaks + Soda Shop, as well as Single Social Media Platform for Geno’s Steaks’ Facebook, our PR team was more than thrilled to receive such coveted industry accolades. The night concluded with an even bigger honor as we were also awarded the final and most prestigious BEST in SHOW for the Chink’s Steaks’ rebrand!

We are incredibly grateful, not only for all of the recognition, but to also represent such an amazing list of clients. Thank you everyone for the continued support! 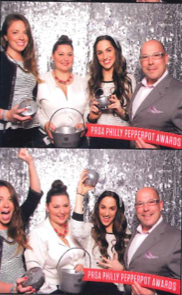 Neff Ranks High in B2B Reviews...
The Importance of Social Media Marketing in 2022...
What Makes a Successful Media Buying Campaign? ...
Back To Blog Page
Close