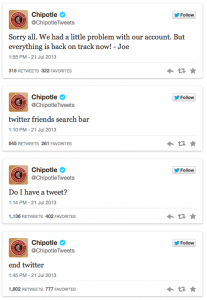 If like me, you follow Chipotle on Twitter (@ChiptoleTweets) you might have noticed some bizarre action this past Sunday (see image above). A series of seemingly nonsense tweets were let fly from the ‘usually’ social media savvy burrito juggernaut. Needless to say I tuned in to see how it progressed, as did the masses like the good folks over at Buzzfeed.com, etc. In just one short day, @ChipotleTweets had garnered over 4,000 new followers. Now this is a pretty common consequence, think about how many of you followed Amanda Bynes after the first of her (many) twitter meltdowns. But to me, there was just something about this ‘hacking’ that seemed a little ‘staged.’

Mostly, because when brands get ‘hacked’ (or when an intern goes rogue after too many cocktails) this and this is more likely to happen.

We have since found out thanks to Mashable, that this twitter hack was in fact fake. (Insert gasp here). As suspected, the overly curated tweets were purposely ‘safe’ and designed to “cut through people’s attention and make them talk.” Which they did, as evident by the 4K new followers. So why did I unfollow @ChipotleTweets? Well, I am not sure if it’s because the whole scenario ‘stunk’ of a publicity stunt from the start, that I’ve lost trust in their voice, or because most simply put, it was just lame.

What are your thoughts?

Tips on How to Improve Advertising Efforts from a Top Ad Agency in Philadelphia...
Is Your Company Ready for a Brand Refresh?...
5 PR Skills that Every Brand Needs...
Back To Blog Page
Close