Social Media 101: Use Your Manners!

Whether you’re building a physical brand or your personal brand, it’s important to always act with your “social media manners.” There are many major companies who have learned this the hard way, and in turn, have suffered tremendously.

Mistakes like, responding to an angry customer with a heartless, canned response or posting something accidentally because a social media manager is controlling too many twitter accounts. Even just one insensitive tweet can damage a reputation that took years to build. We are all human and humans make mistakes. But some social media blunders can be unforgiveable because the world is watching.

The widely known insurance company, Progressive, received backlash from an angry blogger that went viral and received thousands of unwanted tweets. As a response the company replied with the same exact message to all that reached out, coming off as cold and uncaring. Had they addressed their consumers and apologized, their Facebook page might not have looked so repetitive.

When The American Red Cross’s social media manager forgot to switch back to her personal twitter account, thousands of followers received this tweet on their newsfeed from the esteemed organization.

In the wake of a national tragedy it is crucial to terminate all social media activity for a few days. While thousands of people were left powerless or even homeless during Hurricane Sandy, the clothing brand American Apparel decided to have a “Bored From the Storm” sale. Nothing looks worse than a company trying to promote a sale when a huge catastrophe is going on elsewhere. 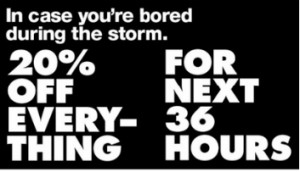 Managing your brand on social media isn’t as hard at it seems. Keep in mind that social media messages and responses are available for all followers to see, then the rest is simple. Sound like a human and have compassion for your customers and the world around you. If there’s a complaint you address the issue and apologize, personally. Make sure you log out of the twitter account that you are paid to manage before you start drinking, and in the wake of a tragedy it’s best to unschedule your social media.

Tips on How to Improve Advertising Efforts from a Top Ad Agency in Philadelphia...
Neff Ranks High in B2B Reviews...
Is Your Company Ready for a Brand Refresh?...
Back To Blog Page
Close