Philadelphia’s Brand Identity: Movin’ On Up

As an advertising agency, a large part of our job is establishing and evaluating brand identity, as well as rebranding company images that are already in place.  Yet, individually, we probably spend a lot less time evaluating our own identity as one of our most important roles; proud citizens of Philadelphia!

Well thankfully The Greater Philadelphia Tourism and Marketing Corp hired a firm to conduct research to figure out exactly what the perception of Philadelphians is. Chill, you can check out the findings here (http://philly.curbed.com/archives/2013/01/15/if-philadelphia-were-a-guy-what-would-he-look-like.php) thanks to our friends over at Curbed Philly. 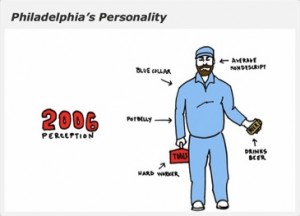 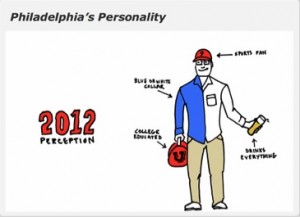 So basically, in the span of six years Philadelphians went from being blue-collar, beer guzzling, nondescript dudes (the prompting question was in regards to imagining Philadelphia as a male, sorry ladies), to a college educated, sports fan who throws back everything from brews to bourbon.

Anyone who lives or at least spends a lot of time in Philadelphia has no doubt felt a cultural shift upwards in the recent years.  Whether it be the foodie craze that has put this city on the map for much more than cheesesteaks, or the fact that Philadelphia is a mainstay contender for top craft brewing city in the US annually (no jokes, http://www.esquire.com/the-side/feature/best-beer-cities-philadelphia#slide-4), there was a tangible feeling that America’s original capital was stepping up its game.   It’s good to know that the perception, or Philadelphia’s brand identity, if you will, is following suit.

Philly is on the rise and the proof is in the pudding…or more appropriately, that DogFish Head 60-Minute IPA you’re sipping on.

What Changes Have Marketing Agencies in Philadelphia Made to Their PR Efforts in Recent Years...
The Importance of PR for Your Business...
5 PR Skills that Every Brand Needs...
Back To Blog Page
Close